Abstract: This chapter traces the reconstruction of boundaries between ethnic groups in the lowlands of today’s Eryuan county from the early Ming by examining their settlement history, military rank, household registration and occupation. The author argues that the integration of military households into civilian lijia units for the purposes of tax collection and labour service assignments from the late sixteenth century led to the formation of Bai communities during the seventeenth and eighteenth centuries; these Bai communities formed the basis for the recognition of the Bai as an ethnic group in the mid-twentieth century. Marshalling empirical evidence from three valley basin societies, the author shows that the Ming transformation in western Yunnan did not result in the formation of fixed, stable ethnic identities, but created fluid social boundaries and ethnic identities. It was this fluidity that eventually led to the formation of new communities based on common property held under the name of village temples and managed by the gentry and village leaders from the seventeenth century onward. The author concludes that these communities were not shaped by language and custom, but emerged through the agency of the local elite, who managed wet-rice irrigation facilities and religious activities through village temples.

The Transformation of Yunnan in Ming China: From the Dali Kingdom to Imperial Province

From the Dali Kingdom to Imperial Province

This book examines how the Ming state transformed the multi-ethnic society of Yunnan into a province. Yunnan had remained outside the ambit of central government when ruled by the Dali kingdom, 937-1253, and its foundation as a province by the Yuan regime in 1276 did not disrupt Dali kingdom style political, social and religious institutions. It was the Ming state in the fourteenth to seventeenth centuries through its institutions for military and civilian control which brought about profound changes and truly transformed local society into a province. In contrast to other studies which have portrayed Yunnan as a non-Han frontier region waiting to be colonised, this book, by focusing on changes in local society, casts off the idea of Yunnan as a border area far from civilisation.

Introduction: The agency of local elites in the transformation of western Yunnan during the Ming dynasty

Abstract: By investigating Southwest China within the framework of the traditional centre–local dichotomy, previous scholarship has categorised it as a borderland. Scholars have interpreted the expansion of the Chinese state to the periphery as a civilisation project, which coupled with state-encouraged assimilation and acculturation ultimately aimed to turn ethnic populations into subjects of the emperor. Adopting the approach of historical anthropology and selecting local society as the focus of analysis instead of the state, this volume demonstrates the agency of local elites in reconstructing their own communities to adapt to Ming state institutions and ideologies. By emphasizing local agency, the authors show how shifts in state policies created fluidity between social boundaries and ethnic identities which in turn provided local elites with the leeward to manoeuvre and manipulate institutions to their own advantage. Daniels and Ma outline the new military and civilian institutions introduced by the Ming that formed the backdrop to the transformation of pre-1382 Yunnan society into an imperial province. They elucidate how protraction of the Dali kingdom’s socio-political-religious culture until 1382 arose out of peculiar historical circumstances during the Mongol-Yuan period, and discuss recent scholarship on the role of Buddhism and political power in the Dali kingdom period.

Investigation on how, from the Ming dynasty on, social relations in the Erhai region changed, with local temples as focus points of village interaction and regulation of water issues.

The Mule Caravans of Western Yunnan: An Oral History of the Muleteers of Zhaozhou

An Oral History of the Muleteers of Zhaozhou

Abstract: Mule caravans established a network across physical, political, and ethnic boundaries that integrated Southwest China, Southeast Asia, and Tibet. Th is article is a fi rst exploration of this little-known mobile network. Based mainly on oral history, it focuses on the mule caravans based in Zhaozhou in western Yunnan from the late Qing to the 1940s, when the fi rst motor roads were constructed. Th e investigation assembles horse and mule technologies and trade organization in detail in order to reconstruct the role and standing of transporters and their networks in local society, in the regional setting, in a volatile political environment, and in the face of challenging natural conditions.

The Zhaozhou Bazi Society in Yunnan: Historical Process in the Bazi Basin Environmental System during the Ming Period (1368-1643)

Salt and Revenue in Frontier Formation: State Mobilized Ethnic Politics in the Yunnan­ Burma Borderland since the 1720s

Abstract: This research reviews the formation of the Yunnan-Burma frontier since the 1720s, when the Qing government reformed the administrative systems from chieftainships to official counties in the middle and southern Yunnan mountains areas. One of some crucial political changes was the policy of salt revenue which directly stimulated large scale ethnic resistance in the region of salt wells. However, the social political context of continuing ethnic conflicts was not only rooted in the reshaping of the salt-consuming districts, but also rooted in social changes in the Yunnan-Burma borderland because of increasing Han Chinese immigration and their penetration into mining, long distance trade and local agriculture. In order to successfully control mountain resources as the base of revenue, the Qing government continued to gradually integrate native Dai chieftains into official counties. Local resistance continued and reached a peak from the 1790s to the 1810s. Pushed by the Qing government, and with the collaboration of different social actors, the synthesized mobilization of frontier formation had made ethnic politics a main style of social political reconstruction, even if commercial exchange, long distance trade, and demographic reshaping also continued to be mixed with ethnic politics as another layer of the YunnanBurma frontier formation.

The Five Buddha Districts on the Yunnan-Burma Frontier: A Political System Attached to the State

A Political System Attached to the State

Abstract: The Five Buddha Districts system prevailed from the 1790s to the 1880s on the frontier between Yunnan, in Southwest China, and the Burmese Kingdom, in the mountainous areas to the west of the Mekong River. Through more than a century of political mobilization, the Lahu communities in this area became an integrated and militarized society, and their culture was reconstructed in the historical context of ethnic conflicts, competition, and cooperation among the Wa, Dai, and Han Chinese settlers. The political elites of the Five Buddha Districts, however, were monks who had escaped the strict orthodoxy of the Qing government to become local chieftains, or rebels, depending on political changes in southern Yunnan. As a centralized polity, the Five Buddha Districts system was attached to the frontier politics of the Qing state before the coming of European colonial powers. The Qing state provided a sociopolitical space for local groups to develop their political ideals between various powerful Dai-Shan chieftains. The negotiation, competition, and cooperation between the Five Buddha leadership and the Qing, Dai chieftains, and neighboring political powers had been thoroughly integrated into the frontier politics of this interdependent society for more than two hundred years. As the history of the Yunnan-Burma frontier formation shows that no mountain space existed to allow the natives to escape from the state through their shifting agriculture, and anarchism was not practiced by the mountain people who were separated from the state, the author argues that a stateless region like James Scott’s “Zomia” did not historically exist in this region.

The Lahu Minority in Southwest China: A Response to Ethnic Marginalization on the Frontier

A Response to Ethnic Marginalization on the Frontier 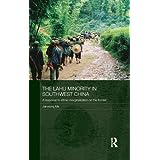 The Lahu, with a population of around 470,000, inhabit the mountainous country in Yunnan Province bordering on Burma, Laos and northern Thailand. Buddhists, with a long history of resistance to the Chinese Han majority, the Lahu are currently facing a serious collapse of their traditional social system, with the highest suicide rate in the world, large scale human trafficking of their women, alcoholism and poverty. This book, based on extensive original research including long-term anthropological research among the Lahu, provides an overview of the traditional way of life of the Lahu, their social system, culture and beliefs, and discusses the ways in which these are changing. It shows how the Lahu are especially vulnerable because of their lack of political representatives and a state educated elite which can engage with, and be part of, the government administrative system. The Lahu are one of many relatively small ethnic minorities in China – overall the book provides an example of how the Chinese government approaches these relatively small ethnic minorities.

Clustered Communities and Transportation Routes: The Wa Lands Neighboring the Lahu and the Dai on the Frontier

Building up Gentry Charity in Cities: The Dong Jing Assembly as a Religious Network for Elite to Shape Local Integration on Yunnan Frontier since the Sixteenth Century, Southwest China

The Dong Jing Assembly as a Religious Network for Elite to Shape Local Integration on Yunnan Frontier since the Sixteenth Century, Southwest China

From 'Luo Bandits' to 'Lahu Nationality': History and Ethnic Identity in the Construction of China's Southwestern Frontier

History and Ethnic Identity in the Construction of China's Southwestern Frontier

Abstract: After the 1680s, Big Vehicle Religion gradually developed on the Yunnan-Burma frontier. It was banned by the Qing government and became a sect of Chinese secret societies. The founders of this religion combined various Buddhist and Taoist elements together and claimed this to be the route to their salvation. They also trained many students to be monks. After the Sino-Burma wars these monks established a Five Buddha Districts system among the Lahu and some Wa villages in western Mekong River, until the system was destroyed by the Qing government in the 1880s. The monks became leaders of the Luohei/Lahu through millenarianism and many Han immigrants also became involved in the movements to become the Lahu or the Wa. The monks performed critical roles as social activists in Lahu cultural reconstruction. As a shaping power, their human agency was deeply integrated into secret societies and they formulated regional political centers as well as a network mechanism for the floating indigenous populations. Secret societies clearly shaped a historical framework for local politics and economic flux in the Yunnan-Burma frontier and became a cross-border mechanism for contemporary life after the border between Yunnan, Burma and Thailand was decided. However, it used to be a networking dynamic linked with silver and copper minefields, Sino-Burma wars, and anti-Qing millenarianism. Local people could also use this frontier space for their negotiations with different states before the coming of European colonialism.