Mao's War Against Nature: Politics and the Environment in Revolutionary China

Politics and the Environment in Revolutionary China 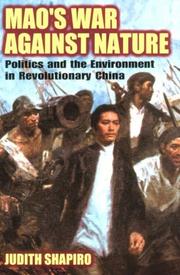 Even if Chinese civilization has developed more against than with nature, the Mao years were a particular exercise in environmental destruction. In one case-study Shapiro tells the story of the draining of the northern part of Dianchi Lake, one of the first steps turning Kunming's lake into the fetid cess-pool it is today.