Dali in Focus
The Bai in Early Chinese Minority Film

After Liberation in 1949 Chinese cinema became a propaganda medium for the New China. The 1950 saw cinemas spreading to all towns, showing movies meant to increase the socialist spirit and fostering national unit. China's ethnic minorities often featured in these films before the Cultural Revolution. Only after its end played ethnic minority themes a role again. Here we look at films from before 2000 that feature the Bai minority. 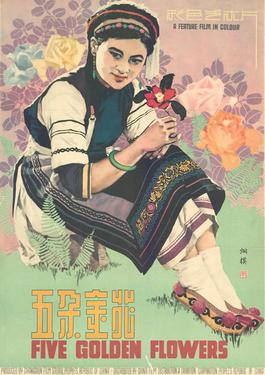 The film sets out with A Peng, a strapping young lad from Jianchuan, arriving late for the horse races of the Third Month's Fair 三月街 only to bump into a group of Bai girls whose cart has broken down. After helping the girls to fix the cart he still goes on to win the races and the heart of Jinhua 金华, at her early age already a deputy commune leader. In a famous song scene at Butterfly Spring 蝴蝶泉 they promise to meet again when the azeleas bloom next year. But as A Peng has only her name he has a great difficulty finding her, bumping into another four 'Golden Flowers' along the way. Each 金华 is an accomplished new socialist woman in her own way: he meets a steel worker, a tractor driver, a herder and a fertiliser maker before finally encountering the girl he was looking for.

The film remains extremely watchable, its age certainly showing in the production quality only adding to its charm. While the socialist values have gone out of fashion, its impact on the shaping of Bai identity cannot be overestimated.

While many early films introduced other minorities as struggling to overcome old-fashioned ways, the Bai in this film are depicted as exceedingly good-natured, hard-working, charming. Bai architecture, song and dance, scenic spots and folk customs all feature so prominently in this movie, that one has to ask if the movie was made after the Bai - or if the Bai were made after this movie. Particularly the women in this film seem to have had a great impact on Bai psyche.

The female lead was played by Yang Likun 杨丽坤, an Yi girl born in 1941 in Mohei (in modern Ninger County). After also starring in Ashima, the 1964 musical about the Yi heroine, she became shortly a Chinese icon before the Cultural Revolution engulfed her. Committed to a mental hospital in 1970 she was never able to resume her career until her early death in 2000.

This 1984 detective story is set in a Erhai village where two youth, Ahu and Hailong, who dream of becoming historians. One day the discover a precious golden pagoda in a little box. The artefact then disappears with the suspicion falling onto a journalist and a visiting dentist. The youth finally discover the culprit.

The 1986 film "Erhai Love Wave" returns to the theme of love in Dali, this time with a backdrop of the Opening and Reform period 改革开放。

Once again with a female lead, this 1992 depicts the widow Caiyue breaking local taboos to open a tea house to develop local tourism and in the process reunite with her old lover.

In their youth Caiyue and Chezao are working together in a tie-dye shop, which then during the Cultural Revolution gets shut down. In order to protect Caiyue, Chezao goes to prison, while Caiyue has to marry another man. Twenty five years later, Caiyue has become a widow, Chezao a widower.