Bai 白族话 is the language spoken by the Bai people 白族 in the Dali area. While Chinese has become the lingua franca, Bai is still actively spoken by many, particularly older people, but it does not have a native written form and comes in many dialects. Here we list the available resources for learning this difficult language.

The Bai language comes in at least three different dialects:

While the grammar does not vary between the dialects, words and pronunciation vary greatly between villages. Gradually, the language is eroded by inclusion of more and more Chinese expressions, particularly as all young people now grow up bilingual, if they do not eschew their native language altogether.

Bai does not have a native written form, making it particularly hard to master the language. Researchers have devised a number of written forms to capture the phonetic. These forms are either based on the Latin alphabet with various methods to encode the many tones of the Bai language or on the international phonetic alphabet. But as dialects vary so greatly, even native Bai speakers familiar with the written form find it difficult to read anything written in Bai.

Only a handful of textbooks have been published on the language.

The only book made for an international audience is the 2014 published 白语366句会话句, containing 366 "conversational" sentences of varying usefulness. The book also has a Chinese introduction to the Bai pronunciation, but nothing on grammar. Many of the sentences are of limited usefulness, like "I have been to the prairie in the North", reflecting that the book has been written to a template fitting all Chinese minority languages.

CP Fitzgeralds "The Tower of Five Glories" has in its appendix an actually quite reasonable introduction to the Bai language.

The best book perhaps is the 2014 published 白话大理方言基础较程. Entirely in Chinese, it has a good introduction to Bai pronunciation and grammar, and starts with relatively simplistic sentences progressing quickly to Bai stories and songs. It also has a useful dictionary.

Similar to the 白语366句会话句, but with better sentences is the 1993 published 汉白语会话手册. It is difficult to find and there are only Chinese translations.

The 1984 published 白语简志 uses a separate transcription, making it hard to read for those already familiar with the current standard.

In Jianchuan some bilingual (Chinese-Bai) books have been produced for pre-school usage. The 2012 published 学前教材 comes in two small volumes, explaining tones and pronunciation, and complemented with nursery rhymes and simple poems.

Most of the above books contain some sort of dictionary, but there also a number of Bai-Chinese dictionaries.

The 2015 published 汉白新词术语集 is a collection of technical terms, to advanced for most. It must also be noted that most terms are simply Bai pronunciations of the respective Chinese words.

There is also a much earlier published 白汉词典, for the Jianchuan dialect.

One of the main difficulties of learning Bai is pronunciation, but even on Chinese sites resources are limited: 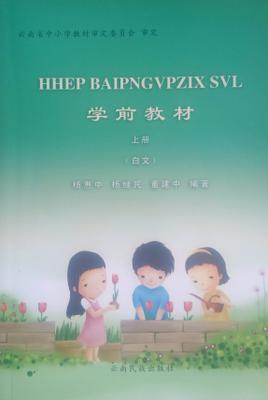