A Republic Era map shows the development of the Dali region over the last hundred years.

When the Qing Empire fell in 1911, it ushered in a period of instability, warlordism and civil war. At the time, communications in Yunnan were still extremely slow and even to government forces the province's territory largely uncontrolled. Perhaps the desire to better control the hinterland led, from 1917 onwards, to a renewed effort of mapping the province. The result was a set of very accurate topographic maps that reveal extend of the changes that happened over the last century.

The map below, reprinted from an engraving made in 1935, is based on research carried out between 1917 and 1925. In 1935 Chiang Kai-shek 蒋介石 ﻿was in overall charge of China, but in Yunnan Long Yun 龙云 was in control, threatened by both Republic forces and the rising communists who would march through the province only a year later. There is a story that during the Long March the communists captured a set of accurate topographic maps: maybe this was one of them.

This map shows the historic Dali County, at the time administered by what is today the old town of Dali 大理古城. At the time, the northern part of Erhai 洱海 was administered by Eryuan County, while the eastern coast was part of Binchuan county. The map also shows a county that has now vanished, Fengyu County 凤仪. Before the Republican era Fengyi was known as Zhaozhou 赵州 and was probably the most important transport hub in western Yunnan.

At the time of research, the modern shoreline of Erhai had already been established, and most of the villages that exist today are also present. But it is also clear from the map, that anything resembling a modern transport system was still missing. The map lacks a legend, but in the 1920s the first motorable roads in western Yunnan had still to be built, so the rudimentary road network indicated in the map is likely to be the set of well-established caravan roads.

Looking at the map in more detail shows the town of Dali (now the so-called Old Town) with a relatively familiar road layout between the main gates. The main road from the south entered Dali at the South Gate 南门 proceeding to the North Gate 北门, with a number of tracks leading down to the lake. Villages like Caicun 才村, Wacun 瓦村, Yizhuang 邑庄 and Shengjiu 生久 were all present. In the case of Shengjiu, the village had not yet expanded to the lake-shore, but what is now a number of small fishing ponds had already been established. 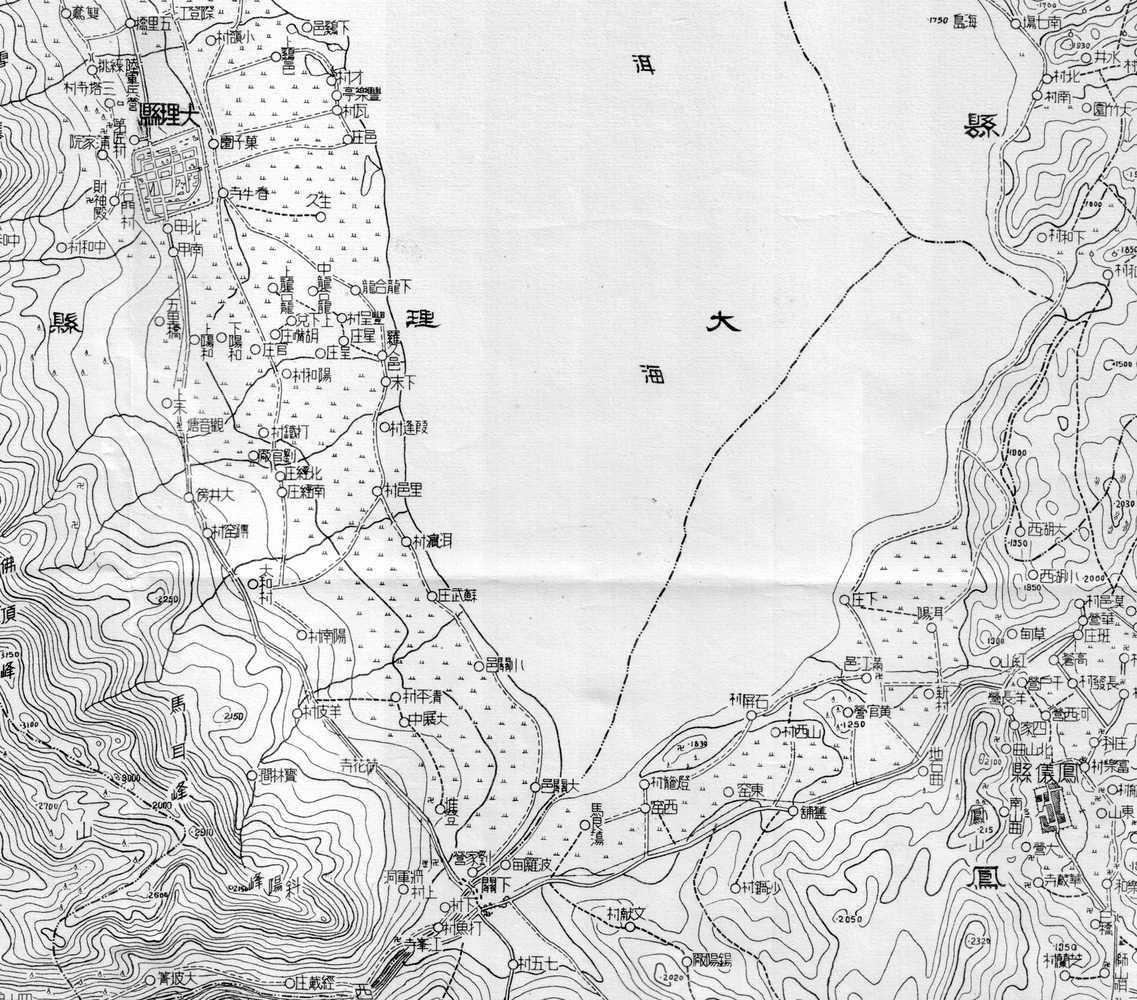 The road network that today circles the lake was not established until much later, in parts actually a demand of tourism not of the local population. That there was in good parts no road to connect the lake-side villages was probably a reflection of lack of need: any real trip would have been into the town of Dali, but not between the villages. The shading of the map indicates the land as low-lying marsh-land, it could have well been paddy fields as today.

On the map there is no indication of any boat traffic or facilities for loading and unloading boats even though it seems that a significant amount of cargo was transported on the lake.

Today Xiaguan 下关 is by far the largest town in western Yunnan, but one hundred years ago it was just a small village where once a custom post controlled the one bridge that crossed the Xier River 西洱河. Only with the development of the Burma Road in the late 1930s and 1940s rose the small place to prominence.