The Dengchuan Plain 邓川坝子, north of Dali's Erhai Lake 洱海, has with West Lake 西湖 and the Miju River corridor 弥苴河 some beautiful, if hardly known, scenic areas. It's natural scenery, however, is man-made, the result of more than a thousand years of cultivation and water-management projects that have transformed a swamp and marshland into the current cultural environment.

While the modern-day Dengchuan is a non-descriptive little town, in its history it has seen better times. In fact, the northern part of the hill on which Dengchuan now lies was the site of Deyuan Town 德源城, one of the statelets that were forcibly unified into the state of Nanzhao, when, according to legend, the founder of Nanzhao Piluoge assembled the leaders of surrounding five tribes at the Songming Town only to assassinate them all by burning down the tower, an event that has become the story behind the annual Bai Torch Festival.

The plain north of Dengchuan is bisected by the Miju River 弥苴河, with the lakes Xihu 西湖 lying to the west and Donghu 东湖 to the east. Donghu has already totally disappeared and turned into farmland, only the geographical name remains as a reminder that the whole basin was once a vast marshland. The defining feature of the Miju River is that its course runs, like China's famous Yellow River, above the level of the surrounding farmland, something that would be impossible were it not for the constant upkeep of the dams to either side. With its straight run from north to the south, the river resembles a small canal or a large drainage channel, which in fact it is. During the period of Nanzhao and the later Dali Kingdom, the river remained untamed, frequently inundating the surrounding area, making it unsuitable for farming. Indeed, the oldest villages of the basin are on its outer edges, elevated a few dozen meters from the level of the basin. The old road from Dali towards Tibet was running on the basin's western side, through the old part of Dengchuan and past a string of Bai villages, of which Jiuzhou 旧州 is the most important. Not only its name, but also a number of old pagodas indicate that this was once a more significant place, the seat of a Nanzhao temple. While the two upper pagodas are of more recent origin, their purpose more decorative, the lowest pagoda today stands in front of a Benzhu temple for the local patron saints.

To the east of the Miju River runs another man-made water-way, the Yongan River 永安江, which at certain points is connected to the Miju river to facilitate water-management. Both the Miju and the Yongan have over time carried large amounts of silt, gradually expanding the farmland further and further into Erhai.

The early local population lacked the skill, the resources and perhaps also the need to drain the marshland below and make it suitable for agriculture. Its population density was low and probably roughly stable during the Nanzhao and Dali years.  The only significant water management project during this time was the construction of a drainage channel southwards from Xihu, called Luoshi River. That channel drained the water from Xihu into Erhai by flowing west of the hill on which modern Dengchuan lies. The lower water level then in turn allowed the foundation of settlements just slightly above the water level of Xihu, knowing that any excess water could be drained away. Today, the aquatic agriculture in and around Xihu could be the only surviving example of early time forms of agriculture in many Yunnan areas.

It was only the arrival of Ming military settlers from the 14th century onwards that totally changed the environment. Over the centuries several million Han people migrated in an organized fashion into Yunnan, with an not insignificant number settling in the Dali region. The military settlers required farmland to feed themselves but also brought the man-power, expertise, management and discipline for, at least for the time, significant water management projects. The current channel of the Miju river is the result of such military water works. While the population intermarried with the centuries, the village of Zhongsuo 中所 north of the small market town of Yousuo 右所 remains Han. The presence of a Ming dynasty bridge in the centre of the village seems to indicated that the village was a post to control the crossing of the river. Further downstream along the Miju river comes another Ming dynasty bridge in the village of Qingsuo 青索, where the Miju river runs parallel a while with another drainage channel. Sluices on either side of the river show that this was a water management project: with the level of the Miju running higher than the surrounding countryside, during the dry season water could be easily diverted to water the fields, while during the rainy season the floodwaters gushing down from the Eryuan plain north could be channeled directly into Erhai without destroying the crops in the fields. The Bai name of Qingsuo village is 'haz yerd', meaning 汉营 'Han camp', indicating that this settlement was founded as a military camp by Han settler-soldiers.

The mouth of the Miju river used to be at the village just a little further south from Qingsuo, Jiangwei 江尾, its name indicating that this was the end of the river, which was conceptualised as a dragon with its tail in Erhai.

The lands south of Jiangwei were perhaps just drained during the 20th century, many of these villages lack temples, indicating that they do not have a long history, but were only settled in the second half of the last century.

Today, the vast project to restore the environmental health of Erhai has led to several projects that reverse centuries of water management, recreating certain marsh and swamp lands, continuing the process of creating an entirely man-made natural environment. 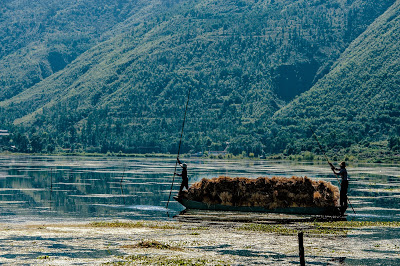