With the Bird and Flower Market and the Muslim Quarter fallen, little remains of 'Lao Kunming', the characterful old town of former times. Now it is all high-rises, wide avenues, chain-shops. Everywhere? No, a small part of Kunming is holding out...

Guandu 官渡, the small town that has given the southeastern administrative district of Kunming its name, is closest to what can still be called Old Kunming today. In the narrow streets small shops cater to every local need, hawkers sell fruit and medicine, while quite a few locals still cling to old style Han Chinese dress, a blue Sun Yat-sen suit (better known as Mao suit) for the men, and embroidered apron for the women. One is almost waiting to see some bound feet.

The heart of Guandu is the old square, now maybe a bit too carefully restored and cleaned of real life. In the middle it sits Jingang Pagoda 金刚塔, built in 1458. Time and the marshy soil of Kunming have both taken their toll on the pagoda, which had to be lifted some 2m to raise it once again to street level in 2001.

Guandu has no less than four temples, the main one Miaozhan Temple 妙湛寺, at the northern end of the square and fronted by two pagodas. The temple and the pagodas date back to the Yuan dynasty （1327）, but while the eastern pagoda 妙湛东塔 stood the test of time, an earthquake toppled the western pagoda, which was rebuilt only in 2001. Two more temples, Tuzhu 土主庙 and Fading 法定寺, sit on the square‘s western side, while the charming Guanyin Temple 观音寺 is just a block further west.

Two pavilions, hidden a little east of the square, mark the old town's boundaries: Kuixing Ge 魁星阁, dedicated to the God of Literature, marks the south, while Lingyun Ge 凌云阁 the northern end. Here a tree-lined path meanders along what was once a little stream, now channelled and polluted. The side streets all around the main square are heaven for little snacks, like boiled snails, old-style cakes or just your ordinary noodle soup.

But while charming, commerce has not entirely bypassed Guandu. A new pedestrian shopping quarter to the west of the main square is just nearing completion, built in the now familiar 'guzhen'-style, meant to evoke the narrow quarters of former times, but lacking charm, local adaptation, and architectural skill. And the Shaolin monks from Henan have been expanding their not so spiritual but commercial empire by taking over the day-to-day running of Guandu's temples just as if they were a department-store or noodle-shop.

Like everywhere in Yunnan, the future seems to be already mapped out for Guandu, but for now this little bit of Old Kunming is still hanging on.

Travel Tips: Guandu is south-east of the airport. Few tourists and even fewer foreigners make their way to Guandu, but bus No 31 from the train station passes Guandu and taxi drivers should know where to go when you ask for Guandu Guzhen 官渡古镇. Find Guandu on OpenStreetMap 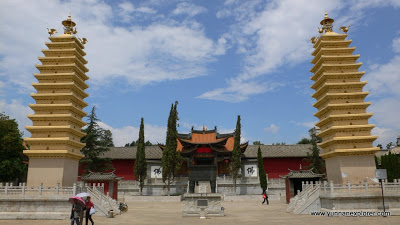