The Wumeng Mountains' bright red soil, the buckwheat's yellow and Yunnan's dramatic skies make the region around Dongchuan a paradise for photographers. 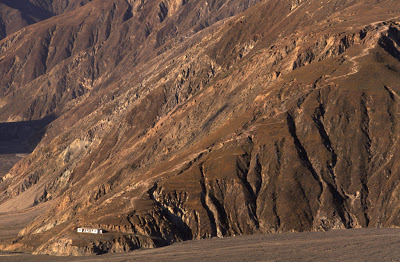 The Red Army fears not the trials of the Long March,

And the majestic Wumeng roll by, globules of clay,

wrote Mao after trekking through the Wumeng Mountains on communists' Long March in 1935, clearly impressed.

But it took another sixty years, until the mid 1990s, that the first Chinese photographers came to discover the Wumeng's scenery. The first came and scooped award-winning photos, but kept their location a closely guarded secret. But slowly the details leaked and now more and more photographers are making the arduous trip into the arid mountains.

The narrow road from Dongchuan, the pretty town in the deep valley of the "Small River" between the peaks of the Wumeng mountains, is not on any map. Only once a day a rattling old bus that has clearly seen better days makes its way from the countytown to Majie (or in the Yunnanese pronounciation Magai), "Horse Market".

Immediately outside Dongchuan the road begins to climb. Soon the green and fertile valley is far below as the bus winds its way up through a desert canyon. The road is rarely wide enough for two vehicles to pass, but there is so little traffic it hardly matters. After four hours through the mountains a few houses appear. damakan The place is too small to have a name. Locals simply call it 109, the number on the kilometer marker on the road. 109 is almost the highest point on the road, which branches here to another small hamlet. From all around 109 glorious vistas stretch to Guizhou and Sichuan. Dongchuan - as the crow flies not more than 20 kilometres away - is barely visible in the valley far below.

Even thogh 109 does not have a name, it has become a must-see destination for many Chinese photographers. So many come that 109 even has a small guesthouse for them. Particularly in autumn the "Winter and Spring Hotel", as the simple quarters are called, is teeming with photographers.

Early in the morning the guesthouse is busiest, as everybody gets ready for the long drive or trek out to the sacred spots from where the first rays of light over the red mountains are the most dramatic.

Damakan, a viewpoint some nine kilometres away along a bumpy dirt-track, is one of their favourites. Just when the light is coming out, the small village several hundred meters below is getting busy and smoke starts rising from the farm-houses smokestacks. As the farmers below are starting their working day, the photographers' morning shift is almost over.

When the sun has risen most photographers return to the guesthouse, for breakfast and lunch - and for some quality time comparing their exceedingly expensive equipment. The latest digital models, the heaviest tripods and the bulkiest large-format cameras are all expertly sized up, their merits discussed. The most successful photographers show their prized shots around, while the amateurs try to lap up every detail.

After lunch, it is time for another shoot as the light turns warmer and brings out the best in Dongchuan's colours. All over the hills the photographers wander in search of an undiscovered view.

But at sunset everybody gathers at 110, another nameless spot along the road. With its sweeping views over the Wumengs everybody agrees: 110 is the ultimate shot.