The Tea Horse Road 茶马古道 into Tibet has become a romantic moniker for Yunnan, but economically more important were the old salt roads.

Salt is one of the most important commodities to sustain life - and since in Yunnan it was rare, its control by the government was an effective measure to extract tax revenue even from people who were otherwise outside the reach of government.

In Yunnan, far from the sea, there are only a few places where salt was produced:

Where salt was either mined or boiled from brine wells small towns began to flourish and trade networks stretched out in all directions. Particularly during the Ming dynasty, which brought many new settlers into Yunnan, this industry flourished.

In Yunlong county, so many brine wells were found along the river that the river was called Salt River or Bijiang River 碧江, the word Bi meaning salt in the local Bai language. Nuodeng 诺邓, nestled in the mountains not far from the modern county town, was one of those places where brine was boiled to extract salt. Nuodeng continued to produce salt until the 1990s, only to resume the salt production when tourism began to take off.

Nuodeng's salt was mostly traded towards modern day Dehong and upper Burma, with Tengchong the most important trading place. Salt was either carried on horses or, when it was smuggled out, on people's backs. While modern motor roads largely follow the river valleys, the old horse and mule paths went more or less straight across the mountains, the main aim to avoid time spent in the river valleys and to shorten the road as much as possible.

Not all of the points mentioned are today easily found, they were perhaps not even villages, but simply landmarks, but the overall route can still be discerned, even though today there is no road or path that follows the old route.

From Nuodeng, the old trail went up to Tianchi 天池, a high altitude lake and modern day nature reserve, and down again towards the Mekong. The Mekong was not easy to cross, during the second world war a road crossing was built, called Gongguo Bridge 功果桥, which gave its name to the administrative center north of it when the old location was flooded for a hydro power station. But the most likely crossing was a bit further north of Jiuzhou 旧州, where an old pavilion by the river still reminds of a bridge that once existed there.

From here, it was up the mountain to the west of the small town for another mountain crossing to Caojian 草间, where a small part of the old trade route still exists in the old part of town. From here, onwards to the Nujiang, was the most dangerous part of the trip, particularly during the summer, when people frequently contracted Malaria. The most likely crossing was at Shuanghong Bridge 双虹桥, where a rock in the middle of the river made the construction of a bridge possible. In winter, it was then a very hard climb across the Gaoligongshan, where icy weather claimed many lives. Today, there remains a walkable trail from Baihualing 百花岭 to the western side of Gaoligongshan. Once the ridge of Gaoligongshan was crossed, there still remained one river to cross, the old accounts simply give 'Bridgehead' as the name. This bridge could have been either near modern day Qushi or much further south in a place called Laoqiaotou 老桥头, where an old bridge across the Longchuan River is still extant.

Then it was then another day to Tengchong, where a salt market existed to sell on the salt to the lowlands below. What people brought back remains unclear, but most likely precious stones, as Tengchong was already known as a market for Jade during the times of Xu Xiake, the famous Ming traveller. 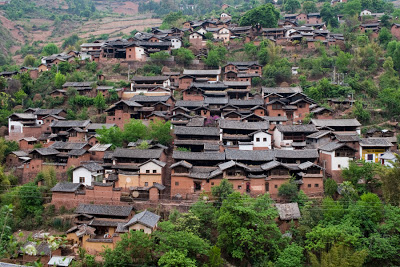