A Dai festival as it used to be
Watersplashing in Yongping

Ask for the Watersplashing Festival, or Poshuijie 泼水节, and everyone will tell you to go to Jinghong, capital of Yunnan's Xishuangbanna Dai Autonomous Region: the 'biggest and best' Dai celebrations to mark their New Year are taking place there. And big it is. Thousands of Han Chinese and foreign tourist flock to Jinghong every year. Jinghong's Poshuijie certainly is big -- and very commercial. If big crowds and big events are your thing, go to Jinghong.

But if you are after a typical Yunnan festival being celebrated as it has been for decades if not centuries, go to Yongping 永平 in Jinggu 景谷 county. To where?

Even old Yunnan hands can rarely place Jinggu, let alone Yongping, on a map. And if they can they will just say: there is nothing -- why are you going there?

The truth is that in Yongping, a small market town some 50km westwards of Jinggu, the county town, has some of the oldest preserved Buddhist temples in Yunnan -- and a devout Dai population to match. And after a hard year's work in the rice and, more recently, tobacco fields, they all don their finest gard, dress up the kids, clean the temples and come out to pay their respects to Lord Buddha.

Every village has its own activities, centered around a village temple or a sacred site. In Qiannuo 迁糯, a small village some 16km south of Yongping with one of the oldest temples in the region, the ceremonies take place around a sacred rock a few hundred meters west of the village. In former times, so the villagers say, the rock was much bigger, but won't be drawn into elaborating how a rock suddenly shrinks (we have our own speculation). On any ordinary day, one would struggle to identify the rocky patch as a holy site, but on the April 13 it becomes an impromptu shrine when all the villagers make their offerings while circumambulating the rock. They place sticky rice and flowers on part of the rock, then gather to a communal prayer, once the monks have arrived from the temple. After that they have a picknick in the sun, dance or watch.

Other villages have celebrations on the following days. But in Yongping itself, the ceremonies only begin on April 16, once the village activities ar over. At noon the villagers from the entire Yongping basin start arriving, marking their arrival with a dance accompanied by drums in the small square. When everyone has come they form a long procession, almost a kilometer long, from the square to the nearest temple. But here they do not stay but walk on to the temple in Dazhai, the traditional main Dai village in the valley, a short walk a little uphill from the modern town.

The following day everyone hopps on a bus or a motorbike to make the short journey past the large sugar mill to another temple, set in a little depression on the western side of the valley. To the locals it is known as the Xiaoxianren temple 小仙人寺. Here again, the villagers congregate to dance, each village with its own unique dance, even though for the outsider the differences are hard to spot. In the twilight of the temple offerings are given to Lord Buddha: sticky rice and small banknotes. The temple attendents scoop up the banknotes, for the money is to sustain the temple for the next year. The small notes fill many boxes: no wonder that in Yongping's shops small banknotes are impossible to get.

Day number three, normally April 18, is the main day. High on the western slopes of the valley lies the Daxianrenjiaosi 大仙人脚寺 Big Footprint Temple, home to large (shoesize 134?) footprint of Buddha and a sacred spring. Until recently, this temple had not been renovated, but unfortunately donations from Thailand made a complete reconstruction possible and the temple has lost much of its charm.

And after this day, everyone returns to planting the rice and tobacco plants. And whoever comes through Yongping valley can truely say: there is nothing happening in Yongping valley. 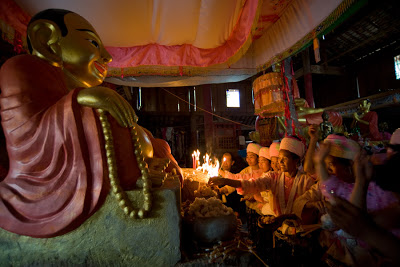