The Yi, one of Yunnan's ethnic groups, worship fire - and nowhere as wild as in Hongwan Village.

Fire keeps warm, fire scares animals away, fire cooks food, fire gives comfort: no wonder that for many tribal groups the hearth is at the center of family life.

The Yi, Yunnan's largest ethnic group, go further: they worship fire. Every year, on the 24th of the sixth lunar month, the Yi celebrate the Torch Festival. It is one of Yunnan's grandest occasions, celebrated in elaborate style from the Stone Forest to the shores of Lugu Lake.

Yet the Axi, a small branch of the Yi, living in Mile County, in the provinces southeast, celebrate an even wilder festival. Every year in spring, on the second day of the third month to be precise, they worship fire with a grand carnival of body-paint and nudity.

Legend has it that once when the Axi were hunting heavy rains came down, sending them looking for shelter. Yet all they could find was an old tree. Freezing because they had nothing to wear they huddled under it. The rains would not stop. Then, an old man, Mu Deng, a local wizard, appeared. He picked up some dry wood, started rubbing the sticks together and started a fire. Now the Axi were not cold anymore and they could cook food. The day was the third day of the second month.

Now, every year on the day, the Axi worship Mu Deng, the man who brought them fire.

The festival begins with a sacrifice of a pig and a chicken at the dragon tree, an ancient tree hidden deep in the forest. Only the locals know where to find it and it must never be chopped down for firewood. On a nearby clearing the men gather to make fire. Like Mu Deng they rub the wood together to make sparks, then light a few leaves. And when the fire is roaring, it is time for the animals to be sacrificed.

Naked as they were when they were hunting generations ago, their bodies painted in color, they carry the animals to into the wood. Then, in a sudden frenzy, the pig is hacked to death and its head cut off. Then the bimo, the village shaman, makes the villager's offerings at the dragon tree, thanking the gods for having given the Axi the knowledge to make fire.

In the last years the festival in Hongwan has become Mile's greatest tourist attraction, drawing photographers from as far away as northern China, Korea and Taiwan. Yet is publicity has not deterred the Axi. The presence of so many rather seems to encourage them to celebrate the festival wilder and wilder.

In 2010, some 40.000 people have been said to attend with more than 2.000 photographers who are now being charged for photos. The best days of the festival might be over now.

Festival held according to lunar calendar on 农历2月初3. 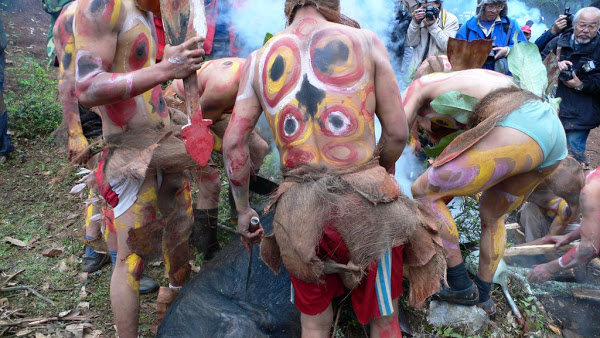