Burning incense at the temple is one of the rites of the Spring Festival, but in Yangzong the villagers carry the "world's largest incense sticks" to their Longchuan Temple.

Where some worship is composed and solemn, in Yangzong it is colourful and boisterous. From mid-morning the villagers gather in the main street. Most villagers in Yangzong, on the southern end of Yangzong Lake 阳宗海, are Han and today most are dressed up somewhat special. Some wear their Sunday best, some dress like their forefathers, some are made-up like going to a carnival. Some are carrying offerings for the temple, some are carrying large paper horses.

At the front and at the end of the parade are two huge incense sticks, some five metres high. Today, the last day before Lantern Festival, the end of the Spring Festival period, is the day the temple receives the large incense sticks meant to burn for the next month. At least in imagination, because today the 'incense sticks' are actually made of paper. But do the gods know the difference?

Apart from the big incense sticks Yangzong's other claim to fame is a form of Yunnan opera 滇戏, the Guansu Play 关素戏, a form of demon exorcising play by masked men.

Festival held according to lunar calendar on 农历1月14. 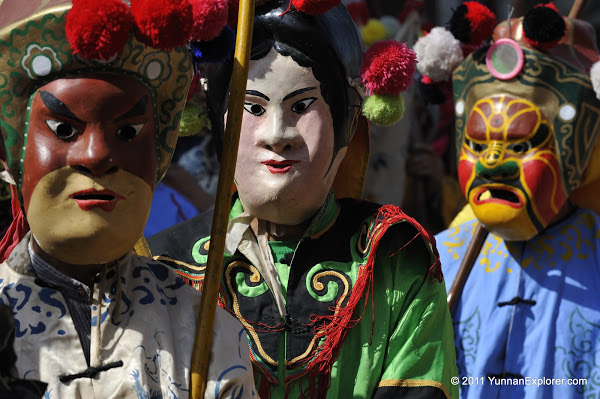