As villages go, Zhizuo could hardly be more remote. Some 70km from the county town, first along a winding mountain road, then on a deeply rutted track without public transport: even in the dry season it takes several hours and a bit of stamina to reach. Yet, at least on the first full moon of the year, the effort is worth it, as Zhizuo holds one of Yunnan's most colourful festivals, the Dress Competition Festival or Caizhuangjie 赛装节.

Zhizuo 直苴 is the Chinese transliteration of the local expression for "Little Valley". And indeed, after first passing the old town of Zhonghe 中和老街, where the old tusi yamen still exists, then past new Zhonghe township 中和乡, another 15km along a small stream lined with walnut trees, the valley widens a little, giving space to a tiny town. Here the bottom of the valley is wide enough to allow some rice farming, with irrigated terraced fields stretching up the slopes. Several unspoilt Yi villages, their houses nestled closely together, are only a short walk away. In the middle of the valley rises a small circular mount. On it eastern slope, facing the rising moon on full-moon days, where the hill-side forms a natural auditorim is a grove of old trees. Under these trees is where the festival is held on the first full moon of the year.

Zhizuo valley is home to maybe three thousand Yi. Early records classified the Yi here as the White Luoluo to distinguish them from the considered much more dangerous Black Yi of Daliangshan, just a little north of here in the mountains of southern Sichuan: "The White Luoluo are tame and foolish of character. The men wrap their heads, go barefoot, and throw a black goatskin over their shoulders; the women plait their hair. Occasionally men and women come into town to sell hempen cloth, hempen thread, honey and pitch pine" (Cited after Mueggler: The Age of Wild Ghosts, 2001). While the Yi here have a bimo, a religious elder, they do not have a script as in Daliangshan and all the graves in the cemetery above the festival ground are marked in Chinese characters. In their spare time the villagers here still spin and weave hemp and honey is still being collected.

The day before the festival preparations are in full swing. Men bring in pine branches to decorate the make-shift stage, women scatter pine-needles on the ground, children scamper around and some old folks have come to watch. Ear-pinching scream from the sound-system interrupts the dance rehearsal as the click-click-click from the early arrivals of the Chinese photographer crowd with their exceedingly large cameras becomes louder. But the pace is still relaxed and no-one is in a hurry.

Some who have come today have already dressed up in the ornate costumes for which the festival is known. With good reason the Yi of Zhizuo are proud of their embroidery skills and no part of their costume is left without decoration. While following a common pattern with embroidered stripes on the arms and legs and flower motifs on the waistcoat, no costume is like another. Particularly striking is the Rooster Hat (jiguanmao 鸡冠帽), worn by all females even if no other part of the costume is worn. A lot of work also goes into the trousers (denglongku 灯笼裤) and the jackets.

With everything set up, the morning of the festival is a calm affair. Only around noon people start filling the slope of the festival mount. In the early afternoon the official part of the festival begins, with well rehearsed performances of local dances accompanied by live music. Despite its prominence in Yongren county and the number of visitors, this for once is not a very offical affair: the speeches are short and time is given to entertainment, not instruction. After the official show is over, the smaller and less attended official competition part begins. Now the older men and women begin their dances, here still separated by sex, with a special dance by those carrying babies on their shoulders. A short embroidery and dressing competition follows. Stall-holders invade the vacated space to lay out their goods for the biggest market in the year.

But then it is already time to eat again. It is hard to beat the Yi of Zhizuo for hospitality and for the guests an abundance of tasty local food is being served. Goats are the main source of meat, but pigs and chicken are also raised. Traditionally buckwheat cakes, baked over an open fire, are the main staple, their slightly bitter taste disguised by dipping them in honey. For the festival rice is also served. Wild plants, mushrooms and roots complement the diet.

Zhizuo is not the only place to hold a costume festival in the region: in nearby Dayao county, Santai 三台 holds its Fuzhuangjie 服装街 on the 28th day of the third month, while Tanhua 昙华 has its festival day on the 8th day of the second month. But Zhizuo claims that the custom started from here. Legend has it that two brothers who had just set up home in the valley after following the small river upstream on a hunt. And when the time came to find a wife they decided to hold a competition for the most skillful girl on the first full moon of the year. But the claim that the festival has been held without interruption since 666 AD is just a little exaggerated: in fact the festival has was 'revived' as a cultural event only in 1987 (Mueggler: Dancing Fools, Modern China, 2002). Now its very success threatens its future as there are government plans to hold it in the much more accessible county town in the near future.

But that does not concern those who came this day to have a good time. As the official events have come to an end and the night draws in the very youngest return home with the older. They leave the youngsters to form a dancing circle to the sounds of the Yi lusheng or bamboo flute under the moon rising above the mountains to the east. A bit of competition for the most desirable girl or boy is maybe what this festival is all about.

Festival held according to lunar calendar on 农历1月15. 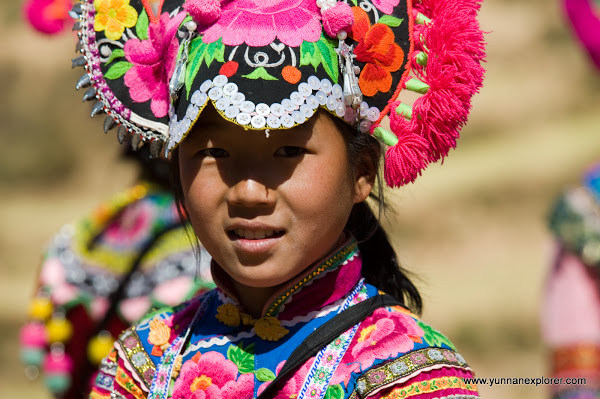