The history of maps in Yunnan began more than a thousand years ago. But it was the Jesuits who revolutionised mapping in China, producing the first accurate maps of the provinces, including remote Yunnan.

To an empire, any empire, maps are tools of control: delineating borders, they help to identify friend and foe; naming towns and villages, they direct administrators and tax-collectors; marking roads and rivers they can guide an army.

Not suprisingly so that it was military installation, garrisons and troop movements that featured prominently on the first maps. In 1393 Ming emperor Hongwu ordered the first set of provincial maps. They proved so useful keeping the empire under control, his successors ordered the maps to be updated every couple of years, detailing garrisons and rebellious people. 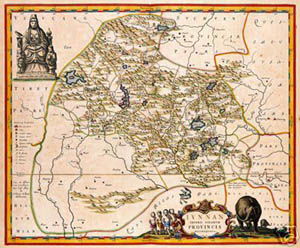 None of these early maps has survived. All we know, they must have been crude. The Chinese simply lacked the astronomic techniques of determining geographic location and drew from travel distances instead. They probably looked not so different to scrolls of Chinese landscape painting.

It was left to a foreigner, the Jesuit Martin Martini, to make the first accurate map of China and its provinces. Time and regulations did not allow him to travel the empire, so he used the old military maps instead. In 1655 his work was completed: the first comprehensive atlas of the Chinese empire.

His map of Yunnan clearly shows the boundaries of real Chinese influence at the time: where Chinese administrators did not rule, the cartographers did not venture. Beyond Iungchang (Yongchang, the modern Baoshan), the map is almost empty; Cheli, the modern Jinghong, is marked but not on the Mekong, but an imaginary tributary. Indeed the upper reaches of all the rivers were a mystery to Martini — and thus the Chinese.

But as Martini did not himself survey the Chinese empire, he could only report what Chinese sources had given him. His inaccuracies are their inaccuracies. It took another fifty years for the Jesuits themselves to go out and survey the country, as they first had to convince the emperor.

So it was not until 1709 that the Jesuits fanned out over the provinces. The fathers Friedel and Bonjour began in Yunnan, but illness and death left the completion of their work in 1715 to pater Regis, the most productive of them all. In 1717 the paters had finished their surveys and reported back to the capital for the assembly of the maps. Taking their readings and Chinese information on places that had had no time to visit, they shifted towns across their maps until all pieces seemed to fit. They knew of the rivers, but mountains they just sprinkeled in. Finally, in 1718 they presented their work to the emperor. 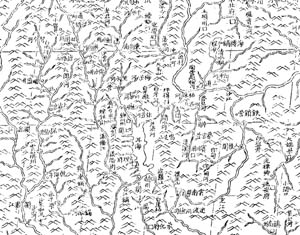 Even the map for Yunnan, one of the remotest provinces, is surprisingly accurate. It shows not only major towns, but smaller places, rivers, lakes — yet no roads and transportation links. The image here shows a small part of the map centered on Erhai, certainly one of the best known parts of the province, but other parts are covered in just as much detail. Indeed, the atlas they produced is so accurate that in 1879, 150 years later, Colborne Baber, a British officer in charge of charting the territory, still wrote:

With the exception of the points established by Captain Blakiston and Lieutenant Garnier, our knowledge of the geographical position of places in Western China rests entirely upon the authority of the Jesuit surveyors [...] [T]heir map is for general purposes a most admirable work, and since it was never designed to serve as a route-map for tourists, or a chart for river-pilots, it would be ungracious to find fault with its deficiencies; especially when it is remembered that all existing maps of Eastern Asia are more or less modified reproductions of their survey.