Fog swirling on a cold winter morning over endless rice-terraces, the red of the early morning sun reflected in the flooded paddies: this is the classic view of the Hani Rice Terraces of Yuanyang, now of UNESCO World Heritage status. The best terrace views are to be had in winter when the air is clearest, preferably on a cold day with a little wind and cloud. For sight seeing the terrace areas can be divided into sunrise and sunset spots:

Duoyishu:
Nothing beats Duoyishu on an cold winter morning when the fog swirls up the valley and the rising sun is reflected in clouds overhead. This place has long been popular and is certainly no place for solitude. You will need to arrive at least one hour before sunrise for the best photo spots and views. Entrance fee.
Longshuba:
The terraces closests to Yuanyang are in the direction of Longshuba, a small village to the west of town, reachable via a dirt road impassable for vehicles bar tractors. After about a two-kilometre, half-hour level walk to the west from Yuanyang’s main square the rice terraces become visible below the path. With the sun setting directly over the mountains in the west, the views are best in the late afternoon and the area invites perfectly for an afternoon stroll after visiting a nearby market.
Bada:
The Bada viewpoint comes along the road to Duoyishu. While the terraces are very extensive at this point, they lack a dramatic focus. However, if starting early enough, it is possible to walk down from the viewpoint through the terrace areas, cross the river and ascend to Xinjie, which can be seen almost directly north.
Laohuzui:
The viewpoint at Tiger Mouth is the most dramatic with a sheer drop down and a corresponding long view in a westerly direction. There is now an official platform with an entrance fee.

Xingcun, about five kilometres from Yuanyang in direction of Laomeng, has been declared a Hani cultural village. Houses are preserved (or made look as if built from adobe) in the traditional ’mushroom house’ style, with neatly thatched roofs. A cultural path winds through the village (past the dancing ground, the swing, ceremonial areas) through some rice terraces (with water-mills; watch out for the water dividers, which traditionally ensure that every family receives the same amount of water) and ends up at the new museum. The main exhibits are artifacts of material culture and history; the second floor is dedicated to Hani costumes from the various groups in the province. The museum’s claim that the Hani made the mountains arable by breaking up the rock with fire and cold water is a bit dubious, agriculture in the area is more likely to have started with swidden farming, that slowly turned into permanent rice farming.

Good photos of Xingcun, especially in winter mornings, when it is often engulfed in swirling clouds, can be made from the main road, maybe one kilometre past the village turn-off.

Vehicles with driver are readily available in Xinjie, but arrange in the evening: It is a race to the terraces in the morning. There is also some accommodation near Duoyishu, expensive for the offerings. 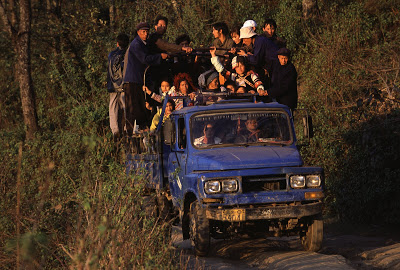