Xishuangbanna, Yunnan's southernmost prefecture, is one of Yunnan's hottest areas: in the semitropical lowlands around the capital Jinghong, China's answer to Las Vegas, roam wild elephants, and the picturesque countryside is dotted with villages of the Dai, Jinuo, Aini, Yao, Bulang and Kemu.

In the heart of Xishuangbanna lies Jinghong City, while to the west is Menghai County and to the east, mostly bordering Laos, Mengla County. Xishuangbanna's for most foreigners unpronouncable name (try "Banna" for short if you cannot pronounce it) derives from the local Dai expression "Sipsongpanna", meaning the "Twelve-thousand Rice Fields", referring to the good dozen semi-autonomous Dai principalities that ruled the border region of today's Laos, Burma and China until the middle of last century. When the communists brought Xishuangbanna under their control, only a few hundred Han Chinese live in the dangerous tropical climate. Now their number has risen above that of the Dai, Xishuangbanna's most populous minority, who still dominate the countryside. North of Jinghong live the Jinuo, the last ethnic minority to be officially recognised as such, while there are many Yao villages along the Lao border to the east. In the west are many Bulang and Aini, officially a branch of the Hani. 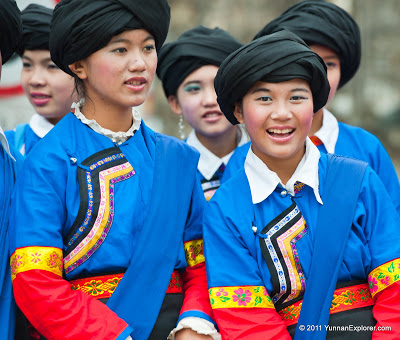